Home
FEATURED
Dogs and Travel Lifestyle: Here is how we make it work.

Can a dog be part of your traveling lifestyle?

So, you like to travel, and you like dogs, but how to mix these two? I am not going to lie, it is not always easy, it can be costly and sometimes just plain old pain in the butt. But with a few adjustments, and ability to be flexible, you can totally still keep your adventurous traveling lifestyle and have a dog too.

And like you needed another reason to have a dog… watch this video.

Stay tuned for my post with common sense tips how to train your dog to love traveling, but the short answer is: yes, traveling lifestyle with a dog is possible. And with “traveling lifestyle” I mean traveling more than once a year is possible, and in fact, the less you plan on traveling, the more difficult it can be to travel with your dog! It is all about making traveling as a normal part of your lifestyle, and then it isn’t really a big deal. Not to you, or your dog. If we have been able to do this with kids and pit bull mixes… so can you! Here is our story. 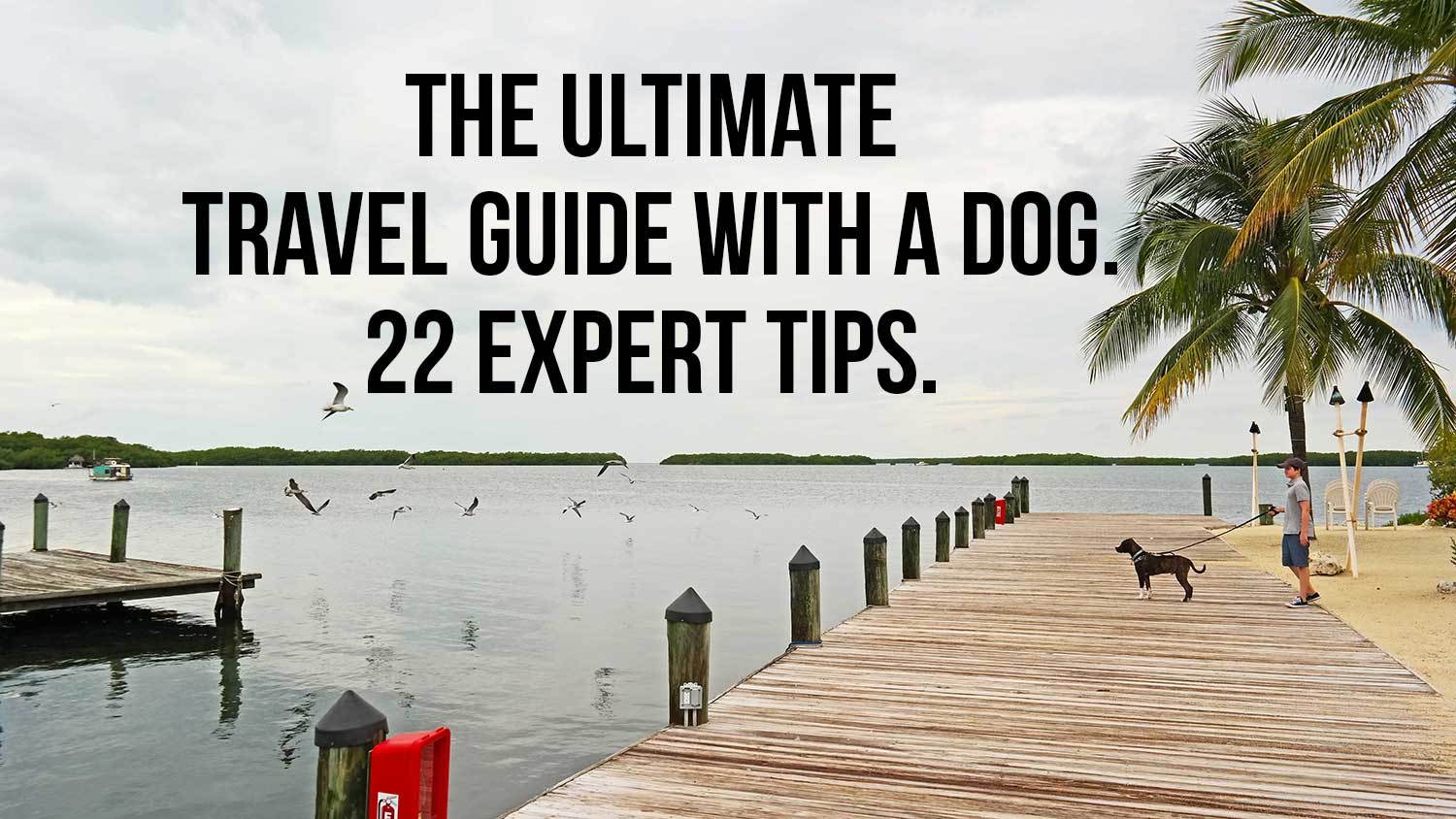 Read my 22 tips for traveling with a dog.

Dog and three babies. No problem.

Our first dog, Frank, was a mutt. Our friend made up a special breed, Alabama Red Nose Hound, for him and we used to tell people that’s his very rare breed, because to us he was rare, such a goofy loving dog. In reality, he was a “terrier mix,” that’s all his papers said when we adopted him from the Humane Society, and yes, maybe he was some kind of pit bull mix, he had many of the pit bull characteristics. Frank was our first baby. 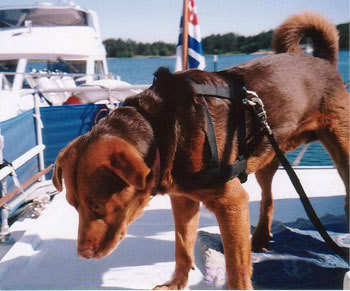 Frank traveled everywhere with us. He was only a few months old on his first trip, and he ended up living in three countries and five different states in the USA, and visiting much more. A few times family members watched him while we traveled, and a handful of trips he stayed in a kennel, but most of the time he came with us. We never really thought much of it – he was a family member, so of course he came everywhere with us, and we’d make adjustments accordingly.

When we had Frank, our three children were also born. They were born in 2000, 2001 and 2003, and all of them were born in different countries. Now looking back, I don’t know what we were thinking; having three kids in three years while traveling and moving around, AND a dog too! But somehow, we managed all of those moves from country to another, fitting the strollers and the dog in the cars, boats and planes, and finding big enough vans to take us to the airport with all that stuff. It was all logistics, and arm muscle too to be able to carry and move our circus around. Leaving Frank behind was never an option. Some of it has changed, but some of traveling with the dog has remained the same. 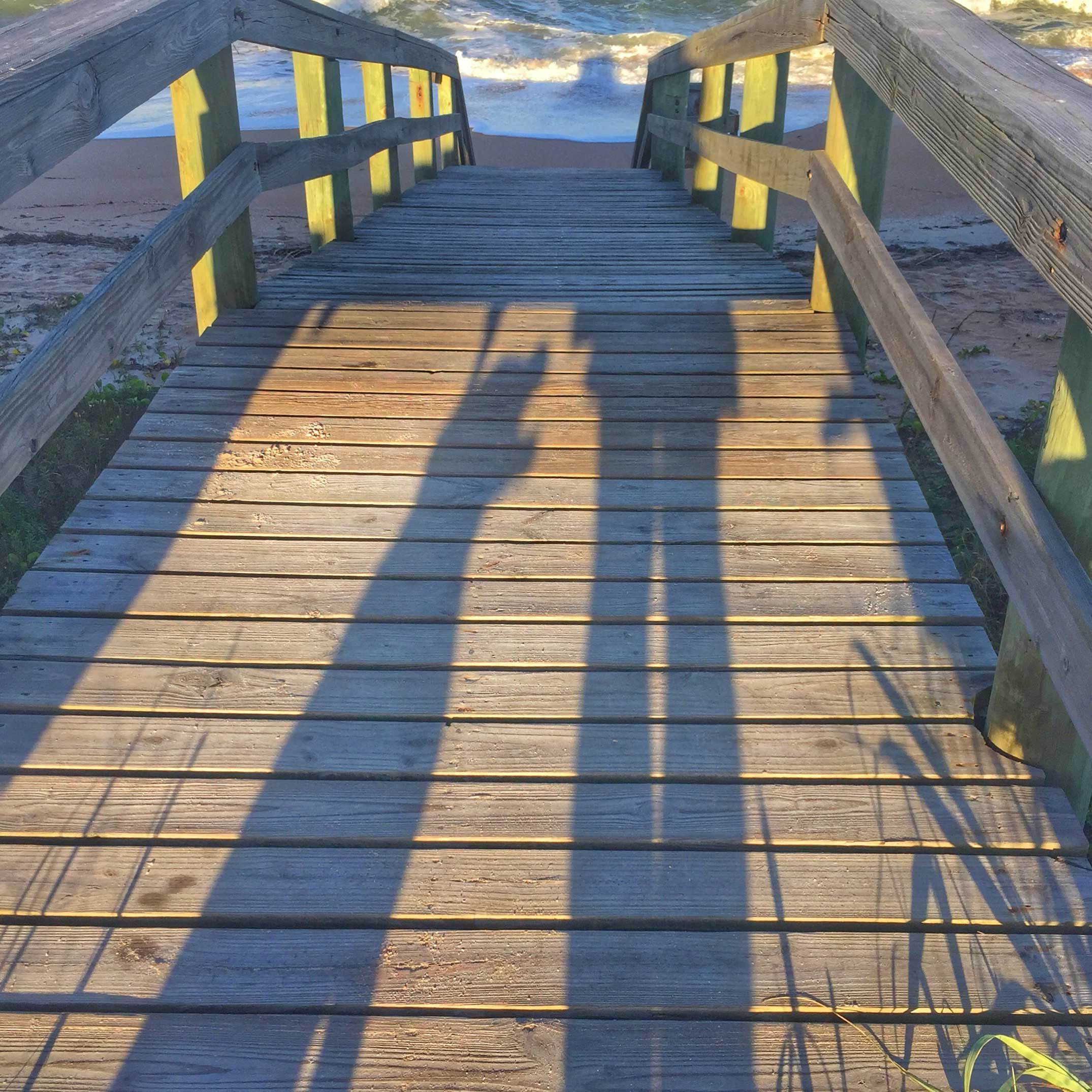 Running into some problems after adopting a pit bull mix.

When we moved back to USA from Sweden, we knew we were ready for another dog. We adopted Hugo from a local shelter earlier this year. This time, he does look more like a “pit bull terrier,” even though his papers say the same “terrier mix.” I admit, we didn’t really do any kind of research about traveling with a dog that could be labeled as a pit bull. We never really had any problems traveling with Frank. 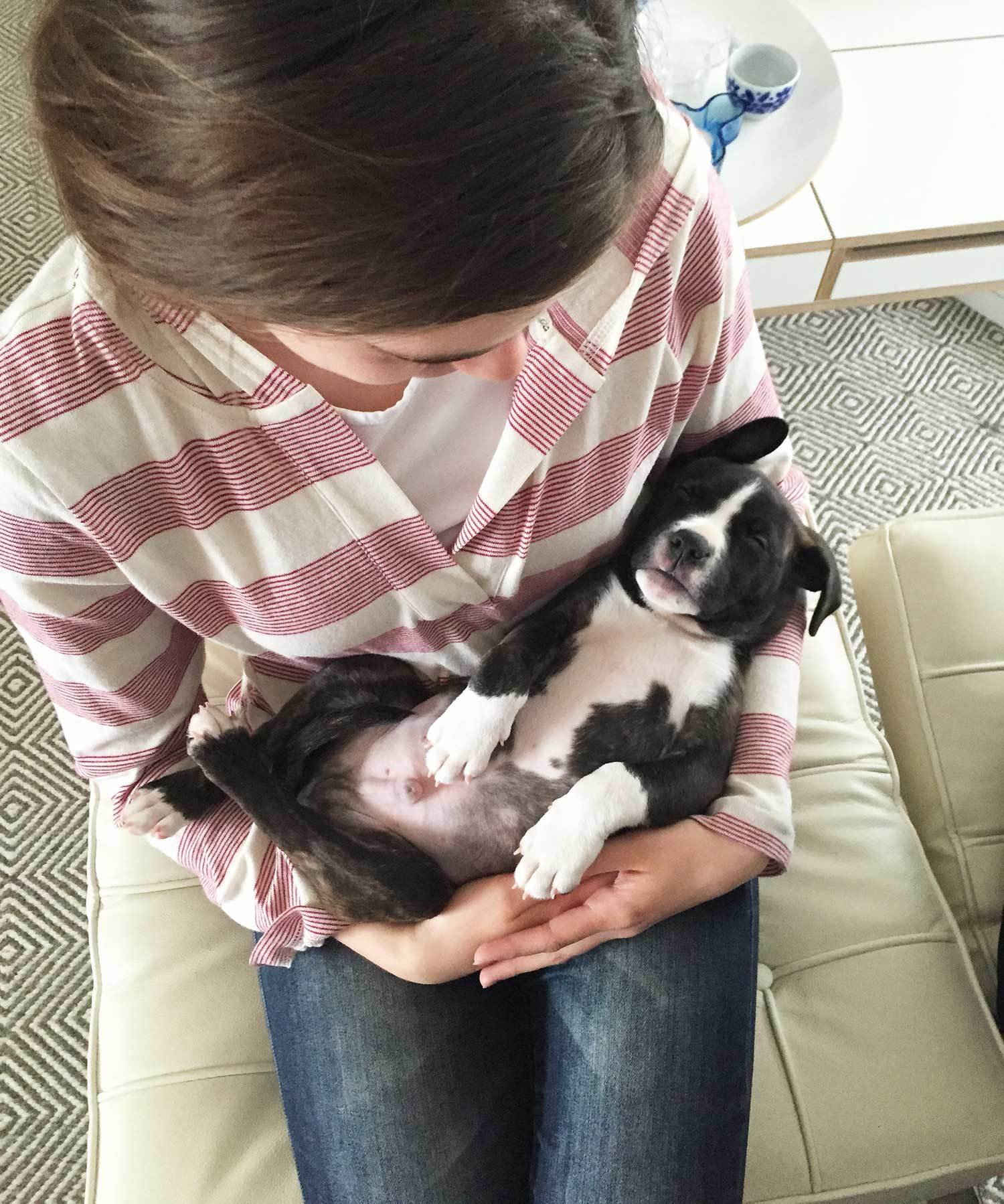 Imagine my shock when I am trying to book flights from New York to Florida and try to take the dog with us, and I find out several airlines, including Delta, don’t allow pit bulls at all. Jet Blue doesn’t allow any larger dogs, and United only allows pit bulls in a IATA approved special crate that is made out of steel or wood (sample here), and that type of crates cost over $500 instead of around $80 what the plastic crates we are used to using cost. Imagine even a bigger shock, when we realized that there are countries where we can not now move or travel to because our dog looks like a pit bull. Yes, there are places where any pit bull-looking dog is illegal.

We ended up not flying from New York to Florida, but driving instead. It added several days to our trip, but it ended up being a fun trip, with several stops, and I doubt we would have had as much fun flying. Was it a huge change in our travel plans because we had a dog? Yes, absolutely. Could we have left the dog in a kennel for two weeks? Yes, absolutely. But to us having a dog means that we try to do everything we can to incorporate our pet in our lifestyle, and make the changes needed to accommodate that. It was inconvenient sometimes to travel with babies too — but we didn’t leave our babies home!

When we were in the process of adopting a dog, some people recommended getting an older dog, so we could “stay put for a while” and then continue traveling after he was gone. What a horrible thought. Both to plan on a short life together with a pet, and not traveling for a few years! We also thought of a smaller breed – more convenient for traveling. I did think about getting one of those cute carrier bags, and carrying a dog with me for trips, but then I remembered, we really like bigger dogs. And we really like what the actual breed description of American Pit Bull Terrier says. These are some of the best dogs with the kids, loving, pretty easy to train and over all fun loving dogs. In fact, pit bulls were used to called the nanny dog, because they are so loving and good with the kids. And adopting a rescue dog was just something we all felt the most comfortable doing.

When we found Hugo from a local shelter as a six weeks old puppy, we knew he was for us. We wanted to have a puppy so we could train him to get used to our lifestyle. Adjusting to new places and traveling can be much more difficult for older dogs who are not used to it, so starting to train a dog since it’s a puppy is in my opinion the smartest thing to do.

Hugo is now nine months old, and he has stayed in a kennel three times during our trips, and loves going there. He has also done four long road trips with us, and has sat in the car for good couple hundred hours, and has slept around twenty nights in hotels.

The truth about traveling with a pit bull. 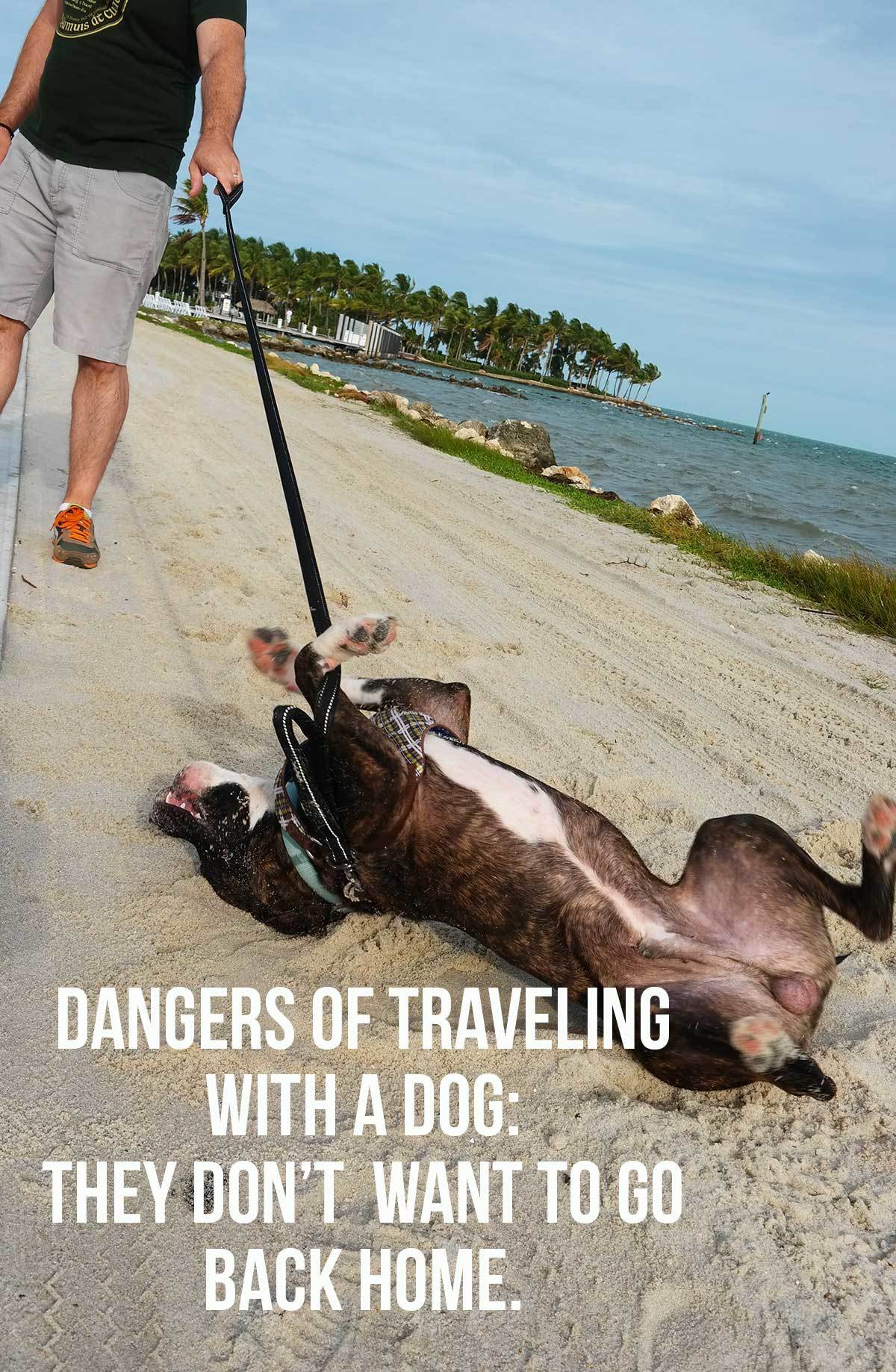 Of course we had read about the horror stories of attacking pit bulls, even though we did not recognize this dog type to be the same as what our personal experience or many of our friends experiences on pit bulls were. While Hugo isn’t a pure breed pit bull, he has some pit bull characteristics. Frankly, I was a little worried about traveling with him. And not that I am afraid what he would do, but how people would react to him. Is there really a culture of pit bull haters out there? How would they treat our dog?

The truth is that traveling with a pit bull is much easier than I thought of, and in fact, on our road trip from New York to Florida we realized that it is a very loved dog breed.

In several places we were stopped with questions

“Is that a pit bull? Can I pet him? Pit bulls are the best dogs!”

In fact, I think his pit bullness gave him status and extra love from several people we’ve met in our travels. All of this made me even more sure that we had made a great choice picking a dog that fits our family, regardless of all of the “horror stories” that mislead people thinking what all pit bulls are. 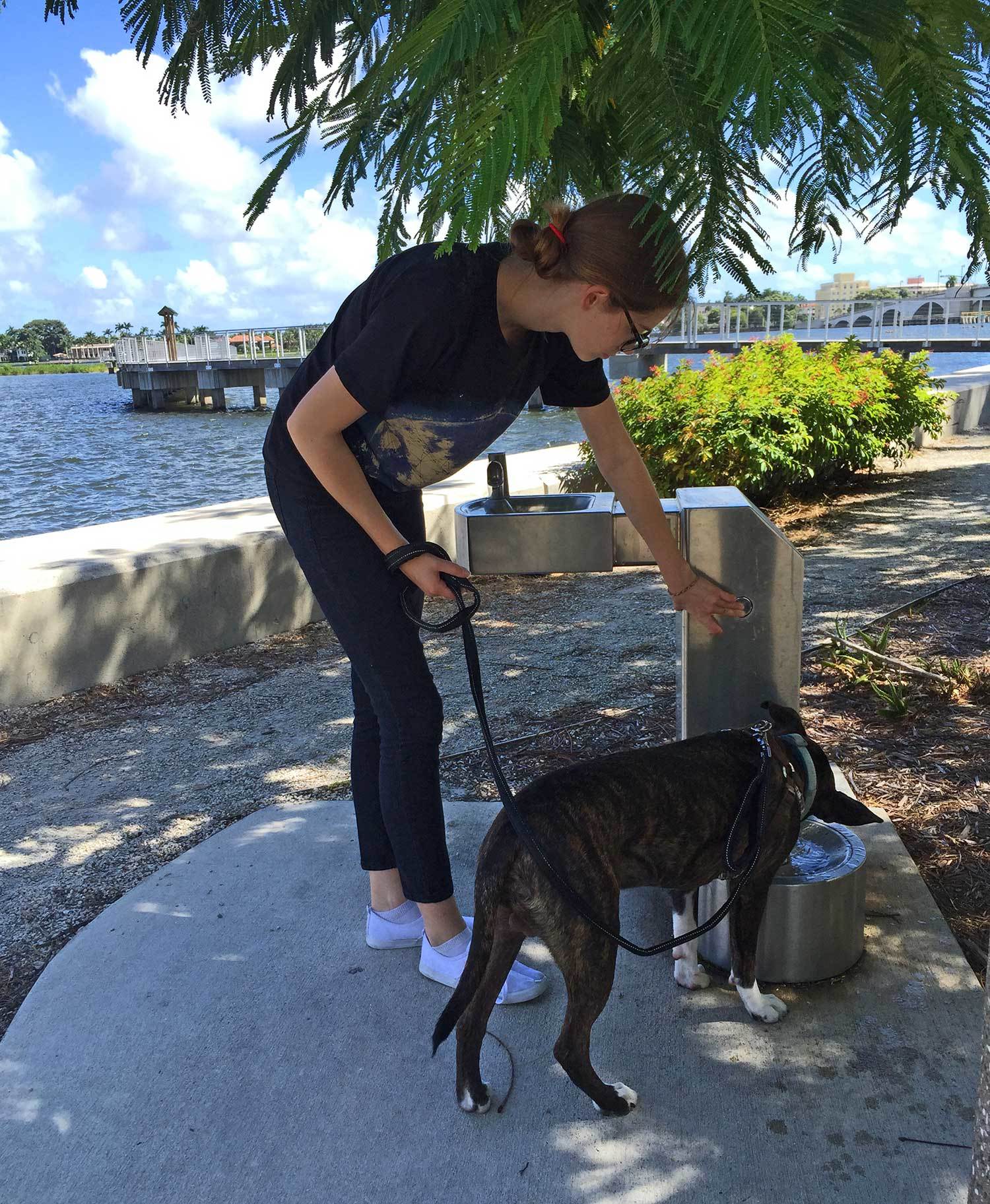 Hugo is only nine months old, but for his age we were surprised how easy it was to travel with him. Of course, there were instances were we was overly excited seeing other dogs, and we couldn’t sit in a restaurant patio with him a few times, and had to take him out for a walk. But the fact we were able to eat out in restaurants with a pit bull puppy is remarkable, and surely gives us hope that the more Hugo gets used to interacting with people, other dogs and traveling, the better he will behave. During all of our trips, we saw no aggression in him whatsoever, and even though he was a little afraid of the elevators at first, and quite don’t get the concept why you can’t get off the elevator when everyone else is, but he got used to even riding an elevator while we stayed in Hyatt Place in West Palm Beach.

We had really only two instances where Hugo scared people. Once in an elevator, I think this poor old lady was praying for her life the entire time she was standing in the elevator with us and our dog. She never said anything, but her relief after she got downstairs alive (and Hugo was behaving well the entire time) was extremely visible.

While in Florida, I also met our lovely team member Brooke, and we were sitting in the lobby restaurant talking. My husband walked in the hotel lobby with Hugo, and once Hugo saw me, he immediately had this big dog smile (read: mouth open!!! Teeth showing!!!), wagging tail, and he started happily pulling towards me. There was another older lady sitting nearby, and she absolutely insisted that Hugo was coming towards her to attack her. I don’t think Hugo even saw this lady, he was so happy to see me, but the lady immediately made a complaint about the dog in the lobby to the hotel management. There was nothing aggressive in Hugo’s behavior, and he didn’t do anything wrong, but it was a good reminder to us that there are people who see our beloved pet in completely different eyes, and we have to remember that.

Get Your Gold Trump Coin For FREE

NEW COLLECTION – I`ll Be Back Cap