Home
News
BREAKING EXCLUSIVE: Michigan Attorney Gives Behind the Scenes Update on the IT Inspection of the Antrim County Dominion Machines

On November 16, several members of the MI State legislature sent a letter to Michigan’s Democrat Secretary of State Jocelyn Benson requesting that a full, independent audit of the accusations prior to the certification of the vote.  This was after reviewing hundreds of sworn affidavits by GOP and Independent poll challengers and evidence of vote switching by Dominion voting machines in Antrim County, Michigan. The radical Secretary of State, who has a problem with telling the truth, ignored their request.

On November 23, Matthew DePerno of DePerno Law Offices, LLC filed a lawsuit on behalf of Central Lake resident William Bailey, demanding Antrim County allow a forensic investigation of the Dominion voting machines after it was discovered that thousands of ballots cast for President Trump were counted as votes for Joe Biden.

Additionally, ballots were re-run through the Dominion tabulator machine after a 262-262 tie on a vote for a ballot initiative that would allow a marijuana establishment to be located within the Village of Central Lake. While ballots were being inserted into the machine, 3 of them were destroyed and were not placed through the tabulator. At the conclusion of the recount by the tabulating machine and with three fewer votes, the result was 262-261, and the initiative passed. Of course, this result could only be possible after 3 of the ballots were destroyed. In his lawsuit, Mr. DePerno asks the 13th Circuit Court to provide Mr. Bailey with the ability to perform a forensic study of the 22 Dominion Voting machines used in Antrim Co., MI to process the ballots in the November election. DePerno, who based his estimate of machines on the number of school boards in Antrim County, later discovered there were only 16 Dominion voting machines that were used in the election.

“Based on all the allegation of fraud, statutory violations, and other misconduct,” DePerno wrote, “it is necessary to immediately permit the plaintiff to take a forensic image of the 22 precinct tabulators, thumb drives, related software, the Clerk’s “master tabulator,” and conduct an investigation of those images, after which a manual recount of the election results and independent audit of the November 3 election may be ordered to ensure the accuracy and integrity of the election.”

In his lawsuit, Matthew DePerno claims that based on the evidence they have provided to the court that Dominion Voting Systems “committed material fraud or error in this election so that the outcome of the election was affected.”

At 5:30 PM on Friday, December 4, 13th Circuit Court Judge Kevin A. Elsenheimer granted permission to William Bailey and his team of IT experts to conduct a forensic study of the 16 Dominion voting machines, tabulators, thumb drives, related software, and the Clerk’s “master tabulator.” In his court order, Bailey was also granted the ability to conduct an independent investigation of the images they obtained in their examination. According to DePerno, it would take approximately 6 to 8 hours to obtain the forensic copies, and it made sense to do the work on the weekend when most government employees and residents would not be in the building.

Matthew DePerno was able to quickly assemble a team of seven highly trained forensic IT experts who agreed to arrive the next day (Saturday) to conduct the forensic examination. Following Judge Elsenheimer’s order for the forensic examination of the Dominion Voting machines, the unelected Township Administrator Peter Garwood informed Mr. Bailey that he would not allow the machines to be accessed until Monday at 11:00 am. DePerno explained that Garwood also contacted Dominion officials and suggested they come to the Antrim County building where the court-ordered examination was to take place. As a result, DePerno and his client, William Bailey, were tasked with ensuring that the Dominion equipment inside the Antrim County building wouldn’t be tampered with before the team’s arrival. According to DePerno, Garwood was told by several elected county commissioners to stand down and allow the examination to take place over the weekend. A group of patriots from northern Michigan answered Mr. Bailey’s call for help. For two days and nights, in freezing cold weather, the group of brave, volunteer patriots stood ready and willing to protect the precious sanctity of our vote. On Sunday morning, the seven-people IT forensic team arrived; Mr. Bailey and his attorney Matt DePerno were given access to the county building and started gathering the forensic evidence. Shortly after the collection began, Antrim County Administrator Peter Garwood began to take photos of the seven IT experts. When one of the IT team members saw him taking photos of them, they demanded Garwood delete them from his phone. According to DePerno, Garwood reluctantly deleted them. While he couldn’t say for certain, DePerno believes Garwood was attempting to dox the highly-skilled IT forensic experts. Several photos of Mr. DePerno’s vehicle were taken by outside protesters as well.

After 8 hours, the collection was complete. With 16 CF cards (similar to SIM cards), 16 thumb drives, and forensic images of the Dominion voting machines in hand, the IT team was escorted to the local Antrim County Airport by two Antrim County Sheriff vehicles, where they boarded their jet plane with evidence in hand.

Two of the patriots followed attorney Matthew DePerno for at least half of his long drive home. Like many Americans, these patriots simply wanted to ensure the safety of a man who has risked so much to protect our right to free and fair elections.

Mr. DePerno expects to have the results of the study sometime tomorrow. He explained the forensic images of the thumb drives and the master computer would tell if machines were connected to the internet—and if they were, who were they communicating with? DePerno said the examination would be able to determine the algorithms used by the computer and will provide the number of ballots read through the machine compared to the actual number of paper ballots. DePerno told us that he doesn’t believe the issue of voter integrity should be a political party issue; he believes every American should want to ensure voter integrity in America, regardless of the outcome. He also explained how crazy it is that Americans are willing to allow Dominion to have complete control over the results of our elections. “When Dominion tells us to trust the results they provide us with, they are essentially taking away a meaningful ability to review the contents of the program or the algorithms,” DePerno said.

“My plaintiff only wanted to know if it’s fair to vote in Antrim County?” DePerno said, adding that William Bailey was simply asking for a forensic examination of the Dominion voting machines “to determine if the machine is accurate or not?”

DePerno has also contacted the Republican members of the Michigan House Oversight Committee and several Michigan senators to discuss the Dominion voting systems, the oppressive and unconstitutional contract that brought it to Michigan, and the system’s ability to manipulate votes. So far, none have been willing to return his calls. 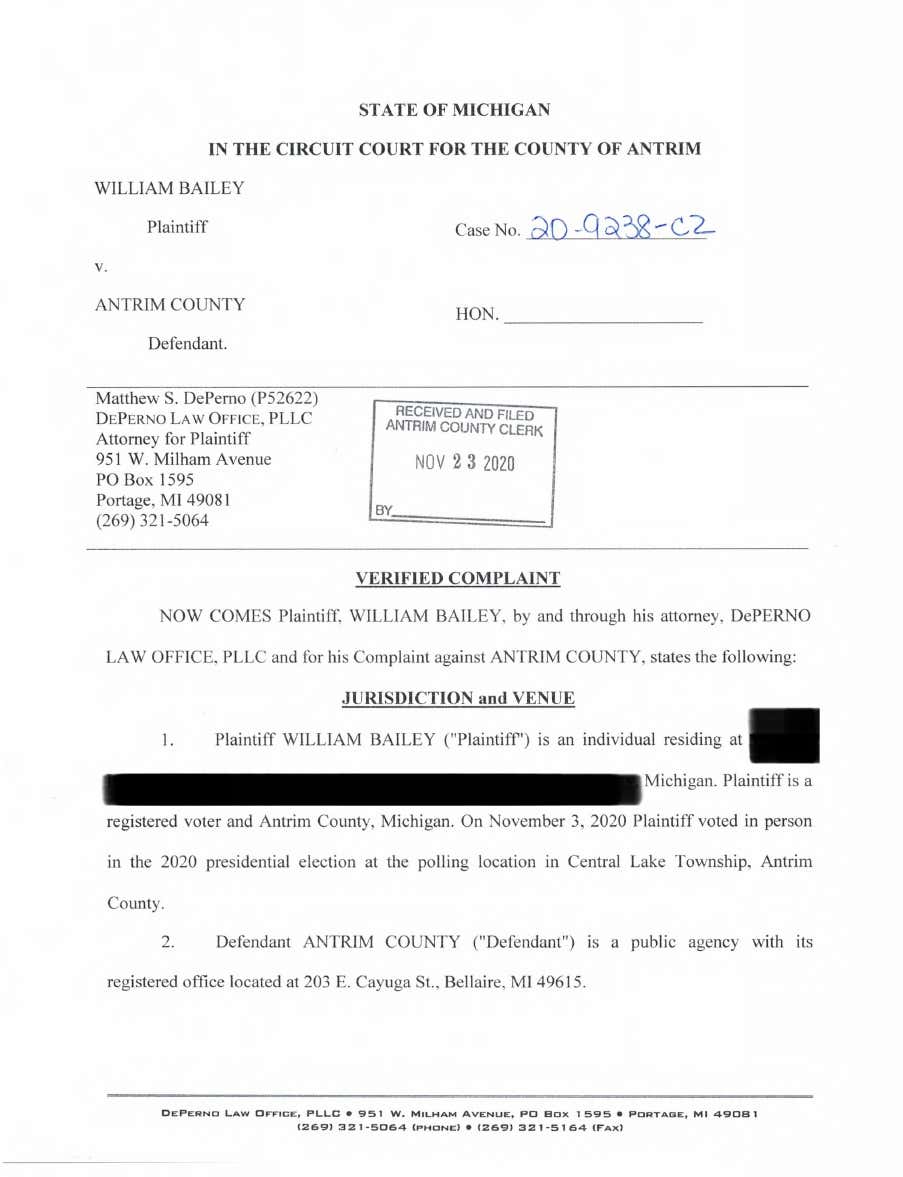 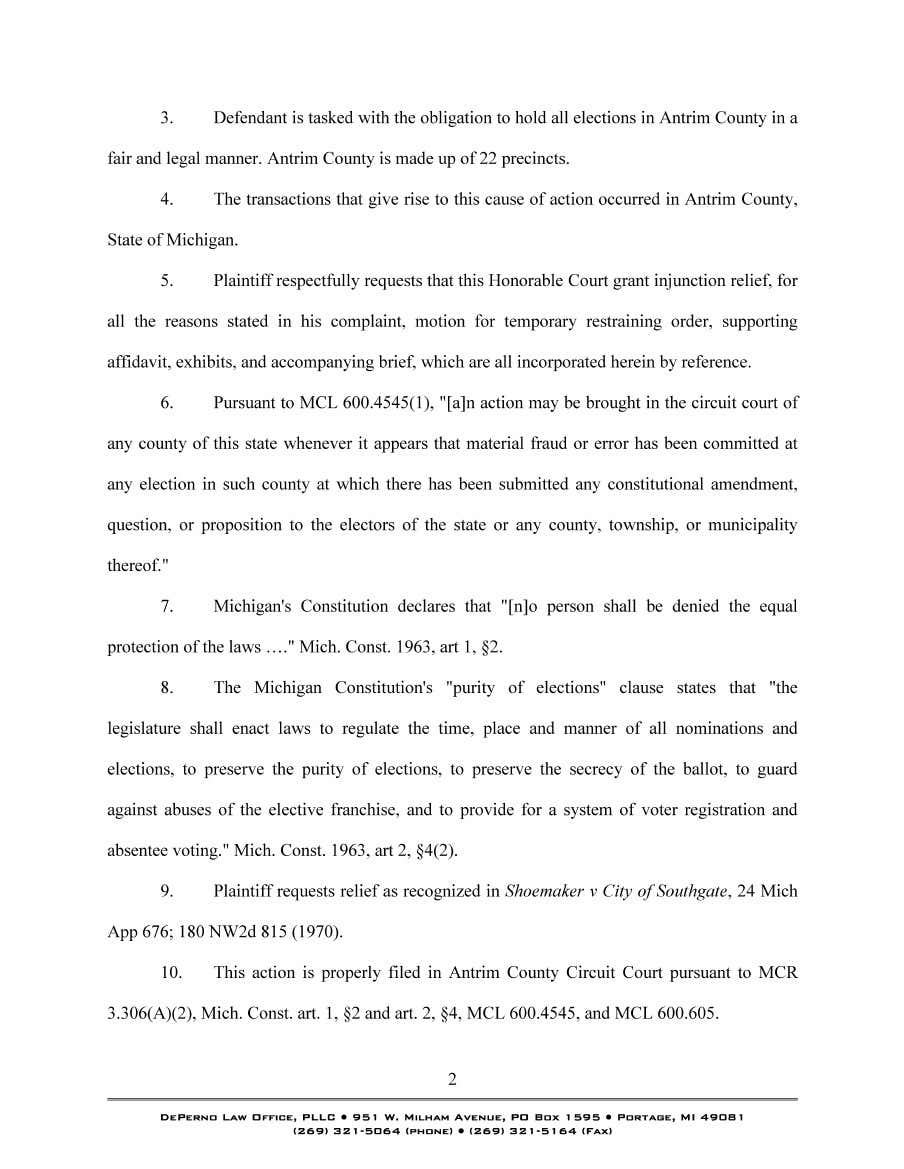 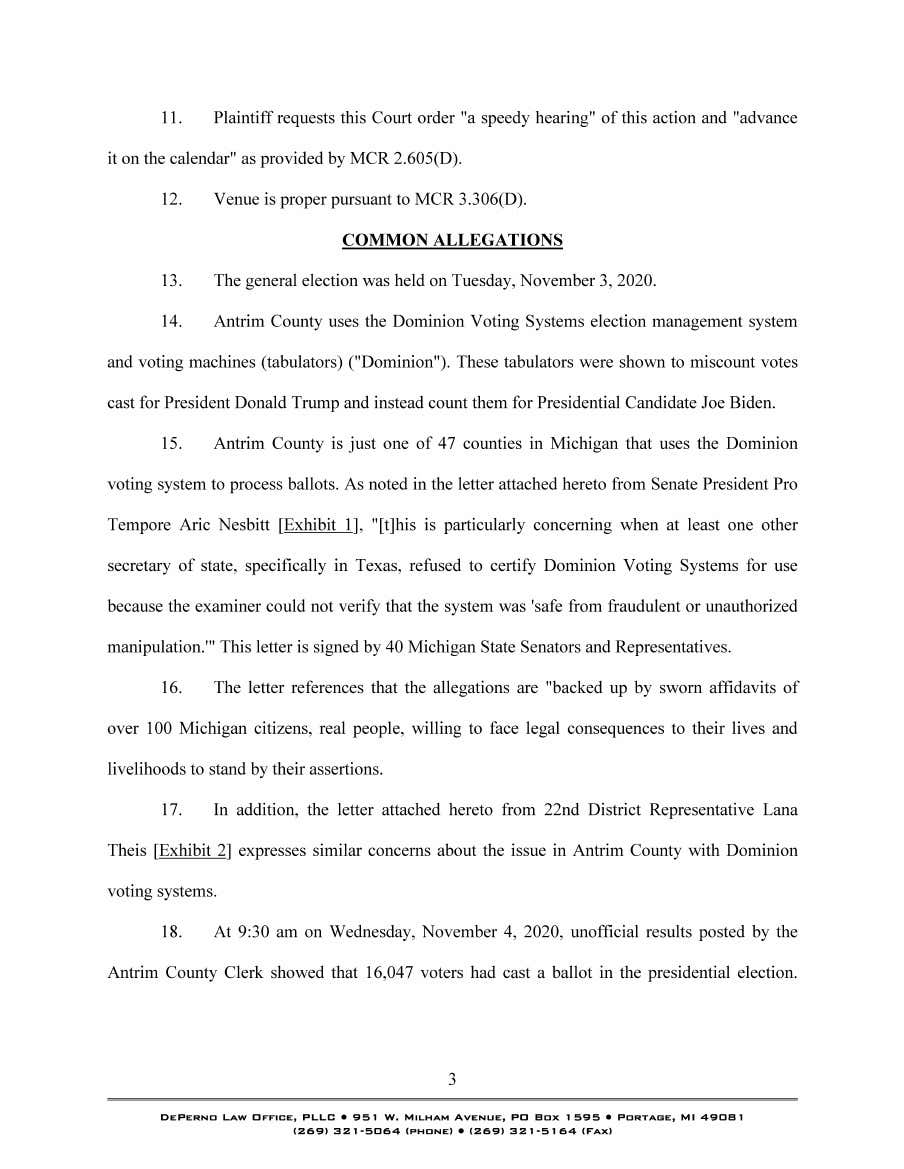 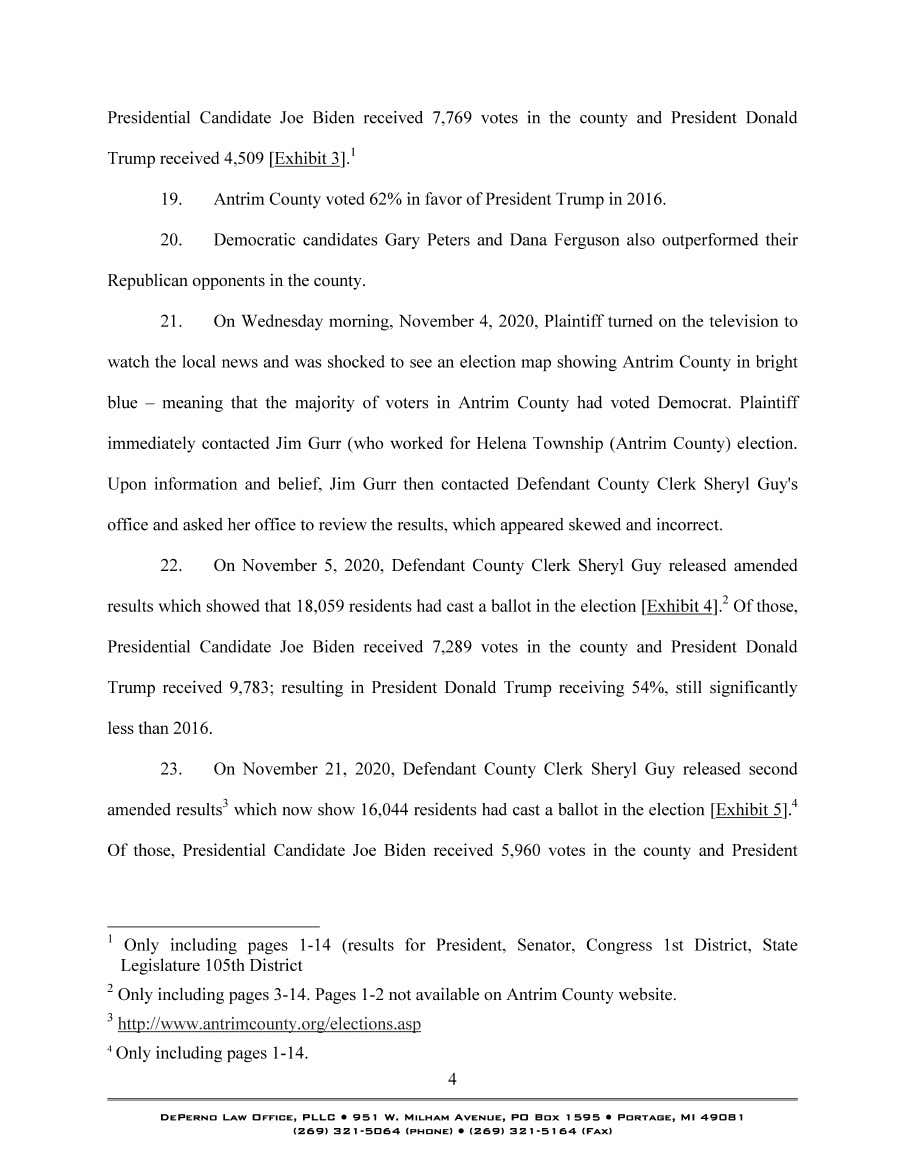 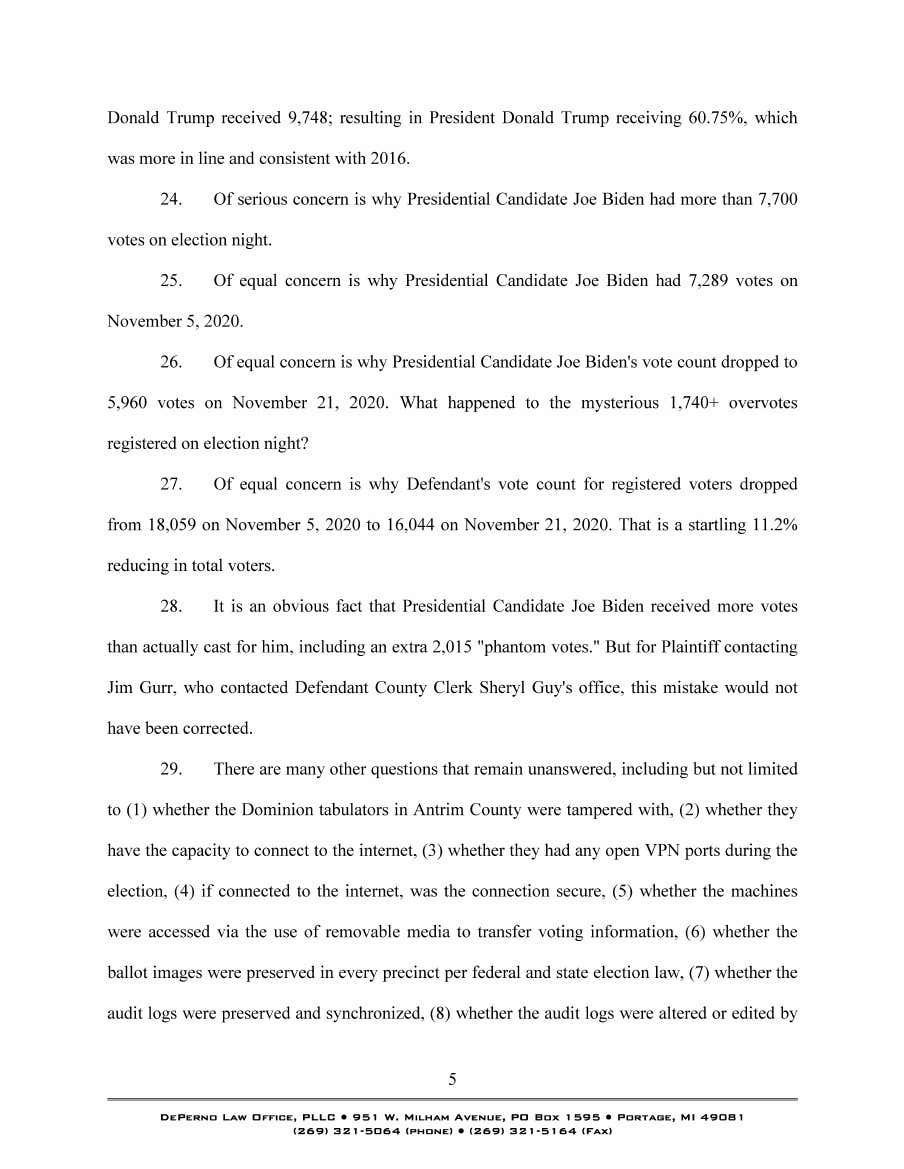 According to a new report on Monday, former President Barack …
13th May 2020
3 min read